A health visitor came to visit a few days after my daughter’s birth. She asked how the birth was. I stayed silent for a couple of minutes unable to answer. What was I to say? Fine? Fantastic? Grand? She only expected a one-word answer: ‘normal’ would have pleased her. But those words don’t come close to describing the textured, multi-layered, hormone-driven web of emotions and sensations that make up the experience of giving birth.

So in the couple of months after the birth, with my daughter asleep on my chest, I knitted a blanket that tells this story through personal data.

“Labour” is a hand-knitted data visualisation. Each square represents one of the 15 hours between my waters breaking and my daughter being born. Different colours, patterns and textures indicate where I was, what emotions I went through, the intensity of the contractions and other sensations, the support I received, and which hormones likely dominated the situation. The blanket is accompanied by a 5mn audio soundscape.

The act of knitting evokes waiting, expectation and hours of hard work. Thus, it becomes an accurate reflection of pre-birth and labour. During the few days preceding and following her birth, all I wanted was to crawl into bed and hide from the outside world. It is likely that my body was craving melatonin, a hormone released in dark, calm and safe situations. Melatonin boosts the production of the birth hormone, oxytocin, which in turns helps to release endorphins, our bodies’ natural pain relief. The blanket represents the place of safety I was craving during that time.

The blanket was shown as part of Create: The Art of Pregnancy, Birth & Beyond, in the Science Gallery in Dublin. Organised by HRB Mother and Baby Clinical Trials Network, the exhibition brought together work from Irish and international artists dealing with topics around pregnancy. 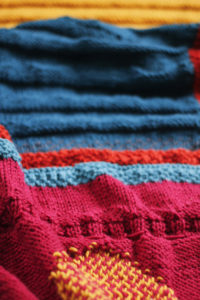 The launch was moving. It is rare to see such honest and diverse representations of that moment in life. A few pieces particularly stuck with me. The Other Side, by Emma Sheridan, is an impressive self-portrait highlighting perinatal mental health issues. A Faint Heart, by Nollaig Crombie, is a slider puzzle representing the hope, waiting and grief of an unsuccessful IVF cycle. Everyday Breastfeeding, by Fiona Carey, is a hanging curtain of delicate drawings of real breastfeeding mothers – they show women’s bodies at work in the chaos of everyday life.

The show felt like a reminder of all the untold stories that our bodies carry. 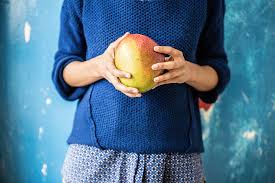 Fan Sissoko is a social designer and researcher based in London. She works with charities and the public sector to improve health and care systems. She uses participatory storytelling as well as food to encourage empathy and community connections.

To find out more about Fan’s work, see: http://www.whatfandoes.com/